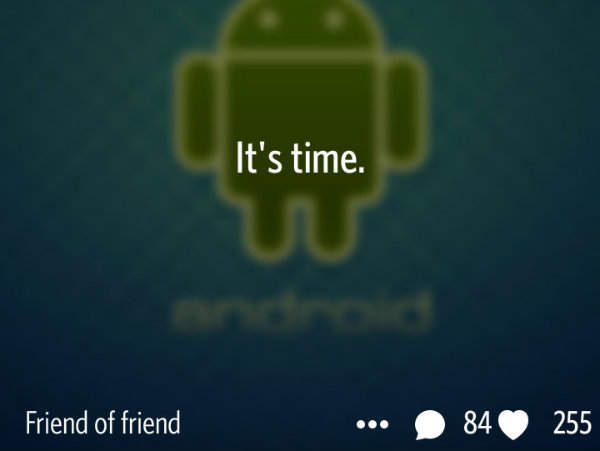 The day has finally come for Android users to jump into the snake pit. For those of you feeling left out, today Silicon Valley’s trash-talking, secret-telling app, Secret, is now available on Android. The app was only available for iOS until today.

Secret has been around since February for iOS, and it has taken root in the tech sectors of DC, NYC and Silicon Valley, allowing journalists, and startup founders to publicly announce their personal woes, professional gripes, and downright dirty and cruel thoughts to everyone in their network…anonymously. Nevertheless, it’s actually great for news scoops and rumors as well. 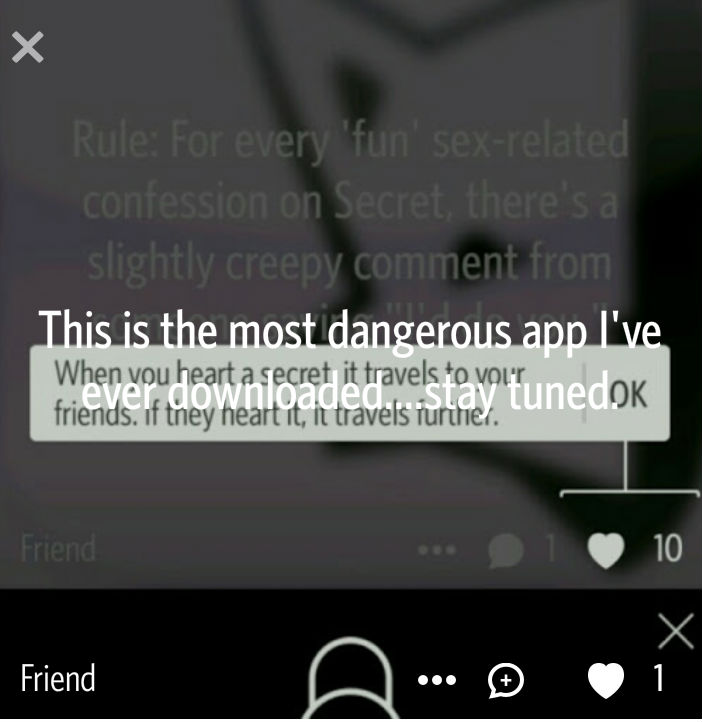 Personally, I’m a bit excited to finally having the ability to participate with my fellow technophiles. Somewhat for gossip, but more for hot journalist tips and stories. However, I also immediate realized the slippery slope the power of Secret has. For instance, you might not want to air confessions after a hard night on the town.

If you decide to check it out, you should prepare yourself to see several things, including: Secrets illustrating common life problems everyone can relate to, trolls attempting (and succeeding) to offend the sensibilities of average humans, people complaining about dating or commenting on sex, and finally, overly honest confessions, playful slights, and downright terrible insults towards friends and colleagues in a person’s industry. It’s those last few that really make the app juicy, entertaining, and as degrading and slimy as a high school slam book. But did that stop you from hitting install? I didn’t think so.

So How Does it Work?

As for the debut on Android, the application is no different than the iOS version. Its functionality is much like Tumblr’s scrolling feed, and it immediately feels reminiscent to the age-old confession trend of Post Secret. Users start Secret by creating an account with a phone number and email address. You must confirm one or both to participate. Phone contacts are used to find user “friends.” I apparently only had seven to start, but this doesn’t limit posts in your feed of Secret posts.

You’ll find two tabs in Secret. The first is your “FRIENDS” tab, where you’ll find posts labeled “Friend” or “Friend of friend.” Posts will have a little text thought with a backdrop of almost anything you could think of. Old Instagrams, pictures of the floor, or basic primary
colors. 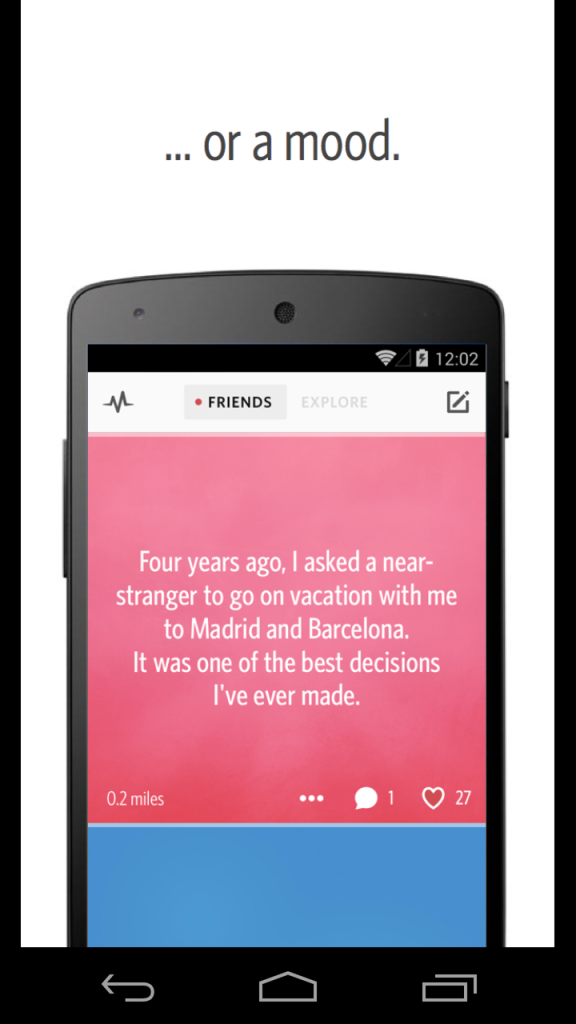 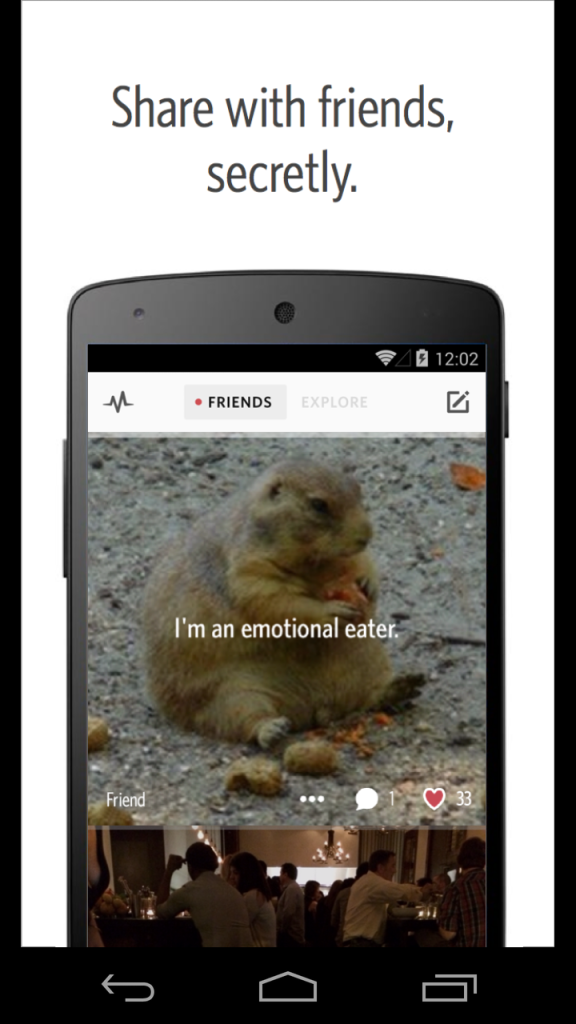 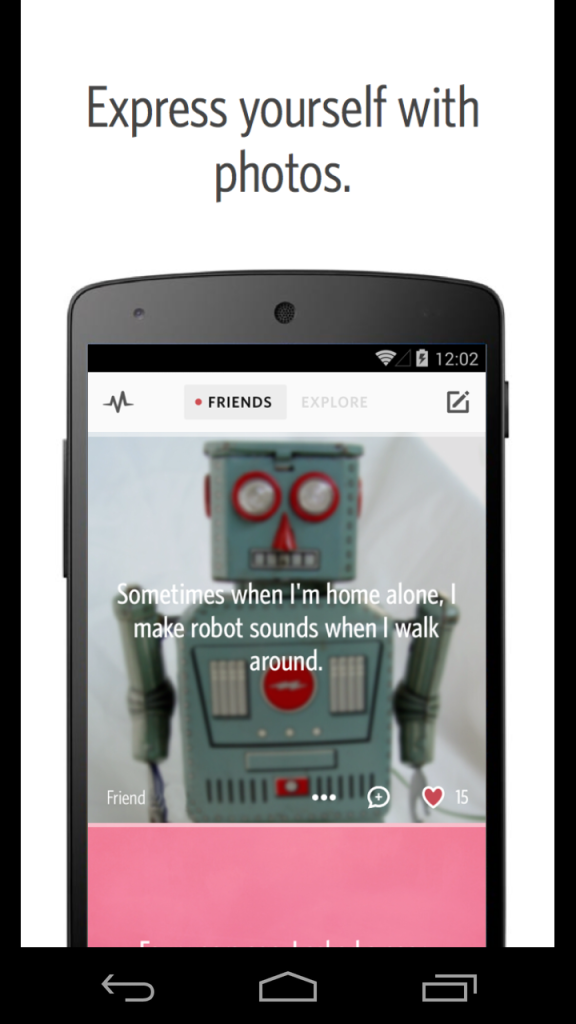 If you like a post, you can “heart” it like you would on Instagram. This action shares it with your own network, upping the visibility of a post, and allowing it to end up with more friends of friends, or even further–to the EXPLORE tab. In Explore, you’ll see posts listed by distance from you (1.3 miles), by city name, or state.  Post something provocative or interesting enough, and you could have your anonymous post shared around the world and even to twitter.

You can swipe right on photos to Share (Twitter, Facebook, mail, or text), Subscribe to a person’s Secrets, Flag, or even Remove items from your feed. Swipe left to <3.  Comments are anonymous, and avatars of playing card suits or even t-shirts will define commenters. However, any comments made by an author’s on their own post are identified with a crown and “Author,” so keep that in mind when trying to drum up conversation on your own posts.

The best part of the app is actually making the Secret. The text is boring; choosing your backdrop is the real art form here. Upload an old photo as a background or even take one of your own. Once chosen, the photo can be re-positioned on the Secret as you please. Then, you can swipe left and right to adjust the blur, and up and down to adjust the dim. This is to make the text of your Secret more legible.

So, Android users of DC, will you join the juicy and slimy world of Secret? Check it out for yourself and let us know what you think.