Snapchat has released a new update to its self-destructing snap and video sharing application, adding video chat and texting features. In a 30-second ad spot, Snap notify users in the application by sending you the video and allowing you to double tap to upgrade your application.

So what’s the big deal? Well, users can now interact in real time with each other. Rather than simply sending belated videos and photographs, Snapchat now allows users to send real time texts and videos. In order to interact in real time, Snapchat notifies you when a friend enters a conversation with a teal camera icon. Without a live demo it’s a bit confusing at first. Snapchat explains that it’s a one-way or two-way type deal. You can show your friends around while they observe, or they can react to you in real time just like any Facetime/Skype/Google Hangout.

Much like Facebook Messenger, there’s a sort of “chathead” functionality to the upgrade. You can move around an avatar of your friend’s camera view while interacting. As always, Snapchat requires users to hold their thumb down to  continue shooting. Holding the blue button during text conversations will allow you to send snap reactions to messages. Oh, and did we mention that you can even send snaps from your camera roll? Sound like Whatsapp, anyone? 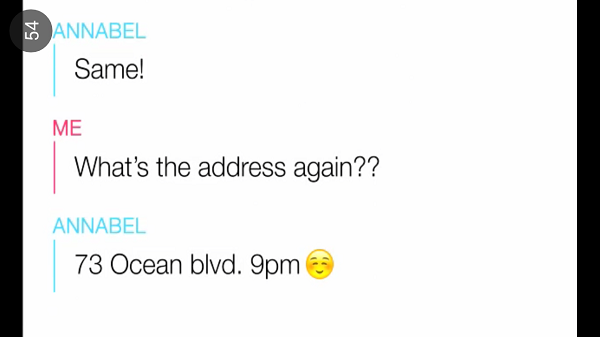 The entire update seems like a pointed kick in the teeth at Facebook, who recently acquired Whatsapp for an epic $19 billion. That said, there’s still the obvious difference of self-destruction that makes Snapchat’s functionality less or more desirable depending on your own conversation preferences. Texts, snaps, and videos are deleted immediately at the end of conversations in Snapchat, although important addresses or phone numbers can be saved with a simple tap. Screenshots are also still possible (while holding your thumb down). We can’t exactly see this update as making Whatsapp useless, but perhaps Snapchat will bring back the relevance of video chatting. Honestly, how often do people Facetime anymore?

For more, check out Snapchat’s full blog on the update below:

Building Snapchat has taught us a lot about what makes conversation special. When we first started working on an application for sharing disappearing pictures, we had no idea how much we would learn. Our classmates were quick to point out that you could always take a screenshot. That led us to the notion of deletion by default – you keep what you want, and we’ll get rid of everything else!

We also learned that conversation feels better when it’s visual. So we decided to make sure that every time you launch Snapchat we take you straight to the camera. It’s the fastest way to capture and share a moment on your smartphone.

With our last product update, we honored the true nature of storytelling – every Story has a chronological order – a beginning, middle, and end. We built Stories to help Snapchatters create narratives and share them with all of their friends in just one tap.

But until today, we felt that Snapchat was missing an important part of conversation: presence. There’s nothing like knowing you have the full attention of your friend while you’re chatting.

We could not be more thrilled to announce Chat.

Swipe right on a friend’s name in your Snapchat inbox to start chatting. When you leave the chat screen, messages viewed by both you and your friend will be cleared – but either of you can always tap or screenshot to save anything you’d like to keep (addresses, to-do lists, etc.)!

We let you know when a friend is Here in your Chat so that you can give each other your full attention. And if you’re both Here, simply press and hold to share live video – and Chat face-to-face!