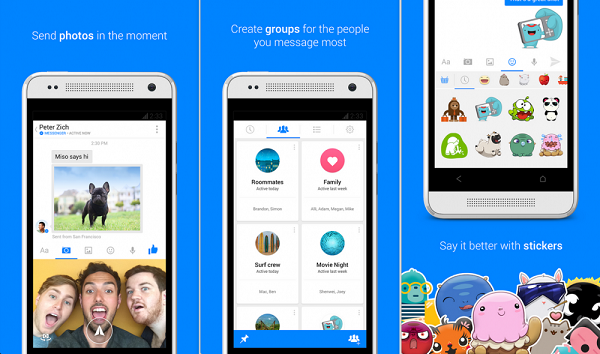 It appears just as Snapchat updated its application to add texting and videochat, Facebook updated its Android version of Facebook Messenger (5.0) to add selfies, theme changes, and more Whatsapp-esque features. The 5.0 update,while slight, is an interesting development considering it already spent $19 billion to buy its own messenger app featuring identical uses. iOS received the same 5.0 update on Monday.

Perhaps the most interesting new feature is the quick selfie. Tap the camera menu button in any chat and up pops your smartphone’s front-facing camera, ready to send your narcissistic love to your friends. In addition to the new features, Facebook Messenger is also stressing its lesser known ability to text anyone from your contacts (sync them first) and call any of your Facebook friends from the app for free.

We think the changes are a clever way for Facebook to corral the market on both sides of its software ownership. While on the one hand, Whatsapp is connecting much of the world’s smartphone owners already, Facebook is using its other avenue (Messenger) to get the rest. Redundant as it seems, Zuckerberg’s goal of connecting the entire world by his company is getting just that much closer.

Check out the app for yourself and let us know what you think in the comments.

For the full list of changes, check out Google Play’s description:

What’s New
5.0:
More ways to message: Now it’s easier to send photos, voice messages and more
Video: Send videos from your gallery and play them right in the app. (Works on Android 4.3 and up. We’ll continue to improve video and bring it to more phones.)
Instant photo sharing: Take a photo and send it in just one tap.
Stickers shortcuts: When someone sends you a sticker, press and hold down on it to get the pack.
Faster search: Just enter the names of people and groups