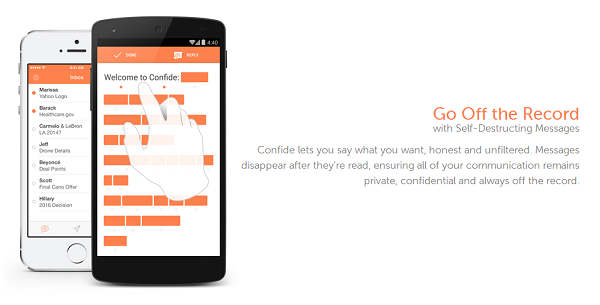 We all know Android users are feeling left out of Secret, but there’s still great news on the horizon people with burning consciences. Confide is a new app available for both iOS (for 100 days or so) and Android (newly) users to send self-destructing text messages to their network.

Confide’s execution is a bit like Snapchat, however it’s creators are aiming this at the professional network side of things like Secret (renowned for its Tech sector gossip).  Messages are encrypted and erase themselves into ether once seen. They also cannot be screen-shotted due to the way messages are revealed. In order to read a message, Confide users swipe along dots with their finger. Words appear and disappear as you scan over each dot, appearing much like a redacted letter.  The color scheme is orange and white, and it’s simplistic enough to be visually interesting.

I actually tried to screenshot Confide’s demo text, and it restricted my Moto X’s ability to do so. Of course, you could always get around this by filming the reveal with another device. Encryption, shmenscryption. Confide messages can be sent to any email address or phone number, and read receipts tell you when they’ve been viewed.  You may also be able to forward emails to users, but we’re still working that out ourselves. 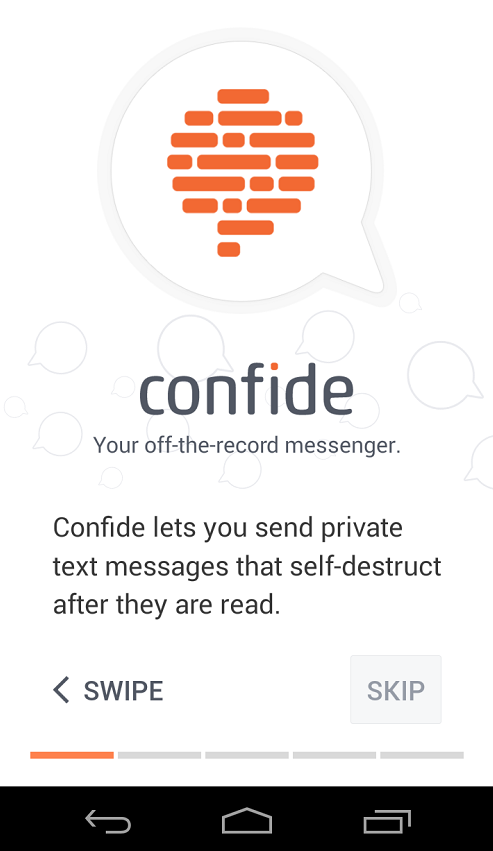 All that said, it’s 2014, and we imagine someone will work out a crack to the app at some point. And considering Confide encourages you to sign up using your first and last name, email, and phone number, the secret-telling-game feels all that much less incognito. You can also connect it with Facebook to add more contacts to gossip with. Confide raised just under $2 million in February. The app is free for the moment but plans to charge are in the works.

You know you can’t help yourself. Go check it out.

Confide is your off-the-record messenger. We combine end-to-end encryption with disappearing and screenshot-proof messages to foster genuine, unfiltered, and efficient communication.

Backed by some of the best early-stage investors in the world, Confide has been featured in Fortune, Forbes, Bloomberg/BusinessWeek, The New York Times, Washington Post and more. And Confide has been used in over 100 countries worldwide.

Spoken words disappear after they’re heard. But what you say online remains forever. We think this is crazy.

Confide. You’ll be glad you did.