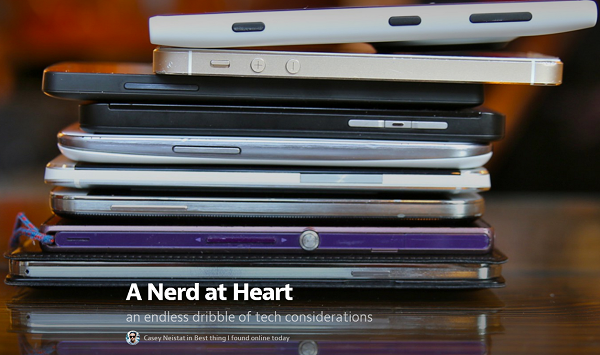 If you love YouTube, chances are you know Casey Neistat, the filmmaker famous for his epic Nike FuelBand commercial, Make it Count, and his stint on HBO with The Neistat Brothers. Today he announced on Facebook that he intends to start blogging on technology. In a blog post published today on Medium.com, Neistat alludes to his childhood love of electronics, telephony, and the general connected-ness he relies on (two smartphones and a Google Glass) for his constantly on-the-go filmmaker lifestyle.

As one of the most modern film making talents around, Neistat is offering a great opportunity for fans to learn from someone on the bleeding edge. Neistat is also known for owning dozens of cameras and, generally, the latest and greatest in tech, so we can only hope he keeps up with it. For the full blog post, check below:

I am a huge technology dork. Mostly my enthusiasm is for little gadgets that fit in my pocket or back pack but social platforms and also occupy way more of my brain space then they should. I’m hoping this platform, Medium, will serve as a place for me to stick those thoughts.

Where to begin. Well. I currently carry two cell phones. I would carry a third but my pants only afford for two. They’re entirely redundant and with little exception carrying two only doubles the amount of time wasted staring into their tiny glowing screens of nothingness. But, alas, I carry two. I used to also always carry a camera, a little one like the canon s120, but cell phones have gotten good enough that they serve for a quick photo or video when there’s something urgent to capture. Anything more than an urgent capture and I can pull my big camera, usually a markiii, out of my back pack. I also shoot a lot of video on my google glass but that’s another post entirely.

I’ve been captivated by mobile hardware as long as I can remember. When I was little (a child of the 80’s) I fantasized about riding my bike and talking on the phone at the same time! what a novel thought. That consideration then involved a large spool of phone cable attached to my bike with a winding mechanism and a rotary phone mounted between the handlebars. I still vividly remember talking on Joe’s mom’s MicroTac from Stop and Shop, the moment I lost my cell phone virginity. “Jordan, (my big sister) I am on a cell phone right now!’ as if she gave a shit.

I have been thinking about a way to share my tech thoughts for a while, really I wanted to start a YouTube channel with all tech focused movies but my lovely wife talked me out of it. She said it would distract me from making my other YouTube movies, she’s right-she usually is.