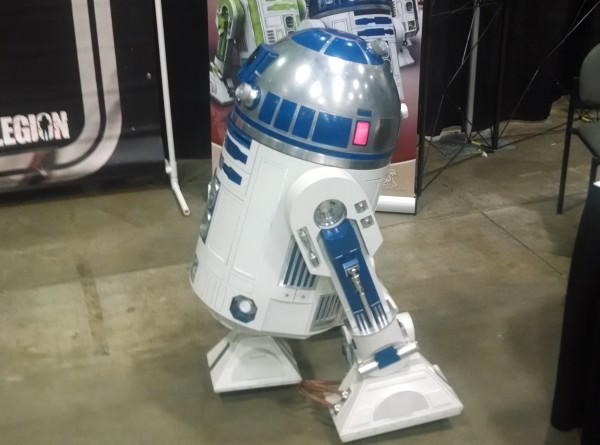 There’s something to be said for Sci-Fi and tech aficionados and their passion for Star Wars at AwesomeCon 2014 this weekend. You can’t make half a turn around before seeing a Stormtrooper, Boba Fett or a RC-controlled R2-D2. As one would have it, we went over to meet Washington DC’s R2 Builders group, R2DC.

In the tutorial below, one of their members talked to us about his fully functioning RC-controlled R2-D2 robot that’s been a hit at AwesomeCon this weekend. The wheels spin, the dome (head) turns, and R2 can make any of the official Star Wars noises using the track list uploaded to an on-board microUSB.  He can also last an entire day on his two 12-volt, 20ah batteries when the dome lights aren’t on.

R2 runs on two scooter motors and uses a 2.4 Ghz remote control (same used in a model airplane) to be controlled. Sounds are played using a standard RF remote with fifteen different buttons. R2DC didn’t tell me how fast he moved, but said R2-D2 was on “low” as to not run over children.