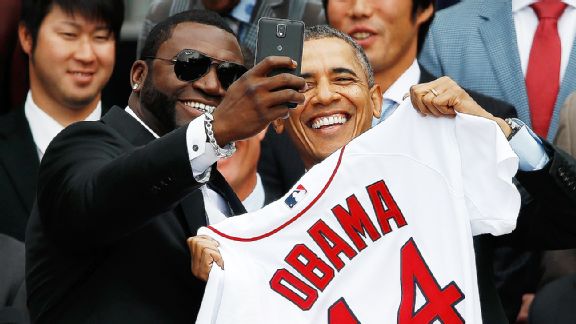 Remember when President Barack Obama got in on a selfie with the British and Danish Prime Ministers at a Nelson Mandela memorial service? Although it technically wasn’t a #funeralselfie, news sources around the world pointed out his insensitivity, and not just Fox News. Selfies have become a source of shame yet again for the POTUS, as he recently got himself entangled in an unintentional promotional selfie for none other than Samsung, who “broke the Internet” a while back with Ellen Degeneres’ now-famous celeb-filled selfie shot.

The Boston Red Sox’s David Ortiz took a selfie with Obama last Tuesday during a Red Sox visit to the White House, and that’s when all hell broke loose (again). Obama was unaware that baseball star Ortiz had recently signed an endorsement deal with Samsung, and it turns out that the selfie was taken for Samsung’s promotional gain. Ortiz denied it was part of any campaign, but Samsung later retweeted the photo he put up. Further cementing the idea that this was a promotional selfie, the company told the Boston Globe that it was “thrilled to see the special, historic moment David Ortiz captured with his Galaxy Note 3 during his White House visit,” and that it had worked with the baseball star to come up with ways to share his experience with fans, but had not anticipated a selfie of such magnitude.

White House Press Secretary Jay Carney said on Thursday, “As a rule, the White House objects to attempts to use the president’s likeness for commercial purposes.”

Could this be the end of selfies for POTUS? White House Senior Advisor Dan Pfeiffer said during a television appearance on Sunday, “Perhaps maybe this will be the end of all selfies.”

Come Monday, the Obama administration did an about-face (haha, get it?) when spokesman Carney denied that any veto on selfies was in the works.

According to Pfeiffer, the White House has “had conversations with Samsung about this and expressed our concerns.”