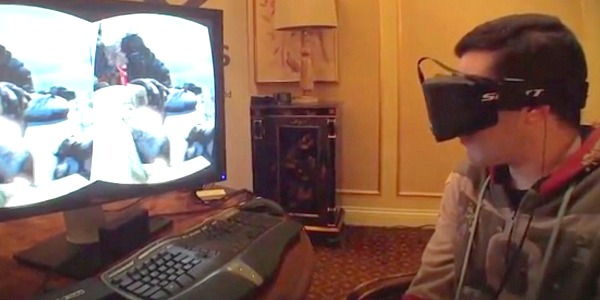 What Exactly is the Oculus Rift?

I first heard about Oculus Rift two years ago. My friend and I were absolutely convinced we were going to start a tech podcast and it was going to be famous. We only published one. But we uncovered some info on a variety of topics —one of them being Oculus Rift. Back then, it was a mere Kickstarter project, but in 18 months it overshot its $250,000 goal to a whopping $2.4 million. You also probably heard Facebook bought the up-and-coming startup for a pretty $2 Billion just last week, but what don’t you know?

Our Editor-in-Chief Erik Hyrkas attempted to get a glimpse of it at CES 2014, but their appointments were so booked, only the first generation of the Oculus VR (virtual reality) was able to be demoed (currently there is a Development Kit 2 in the works). You can check out the demo set-up in the video below:

This is perhaps the most revolutionary gaming innovation since Wii-mote. And if they play their cards right, Oculus Rift (err, Facebook) could hold a monopoly on VR technology. If you strip away all the hype, the Oculus really is only a head-mounted display (read: cool goggles) with great specs —a 7″ screen, extremely wide field of view (1280×800 aspect ratio), and a low pixel latency, which sets it apart from the competition. Not to mention that it also it’s the most immersive VR ever created. Oculus is a great product, and many game companies are snapping up the chance to work this new platform, save for a few who bowed out when Facebook bought it outright. If you want proof, just check out the list of games to be released with Oculus Rift compatibility in mind. There’s around 170 games just waiting to burst your eye sockets with Oculus VR pleasure.

Of course, goggles aren’t the only accessories in VR gaming. There are other products, such as haptic suits (designed to give the player the sense of touch) and omnidirectional treadmills designed to be used in conjunction with the Oculus Rift that are going to revolutionize gaming and likely military training.

The first game to add support for the Oculus Rift was Team Fortress 2, a free and open-source first person shooter video game modded from Half Life. But perhaps the newest and most exciting collaboration is the project Gallery: Six Elements.

The game is currently in development specifically for the Oculus Rift platform after a successful Kickstarter campaign. The game is a bit like the mystery game Myst. If features puzzles and mental obstacles to the players goals of finding a mysterious gallery. Some of these problems were made to be a lot more challenging with the added VR issue. It will be especially taxing considering the needs of literal body persistence, awkward controls, and general troubleshooting of moving your character int he game. The game’s developers are using this innovation to show how groundbreaking VR technology is. There’s even a header on the developer’s website saying “No Jump Scares, Please,” noting just how extremely immerse virtual reality of the Oculus is, and how vulnerable it will be to gamers. Whether or not this game is a success may determine the future of the Oculus Rift. Then again, with 170 titles on board  there’s many futures to be had.