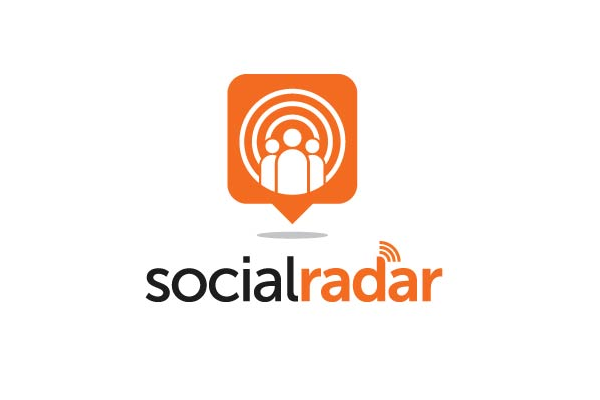 Two years ago, location-based apps like Highlight and Sonar were going to be the next big thing, according to participants at SXSW. But a funny thing happened during the annual tech conference: no one really used the apps. They drained your battery and weren’t particularly useful.

But are they now?

Michael Chasen, one of the masterminds behind the infamous college technology tool Blackboard, thinks so. He’s founded SocialRadar, a location-based people discovery iPhone app that pulls in your contacts from Twitter, Facebook, Foursquare, and other social networks to show you who’s nearby. We tried it out to see if it’s improved on the “ambient location” space.

Once you give the app access to your networks, it’s pretty simple to start using SocialRadar. After you set the “radar range” to tell the app how far to search distance-wise for connections, you can start browsing through the app’s users and your own connections. SocialRadar sorts the contacts for you into groups, from everyone using the app to Friends, Friends of Friends, and even those who have similar interests or attributes (such as age or gender) as you.

Once you select one of the sorted groups, you’ll see a feed of the people around you. Swipe right on any user’s profile and you’ll see their location (perhaps the app’s creepiest feature), pulled from their iPhone’s location or an action on another social network (like an Instagram/Foursquare/Facebook check-in). Tap on the user and you’ll see a profile, compiled of information pulled from the social networks they’ve let SocialRadar access (or not, in the case of your connections who aren’t users).

Right now, it’s hard to judge just how useful it will be. Scrolling through the app, I mostly came across SocialRadar employees and other social media professionals, though that may be because I didn’t give it access to all of my accounts. It might also have to do with checking in at an actual event to find proximate attendees. So this may come in handy when you attend a certain someone’s tech meetup or launch party, and less so on a Wednesday afternoon. 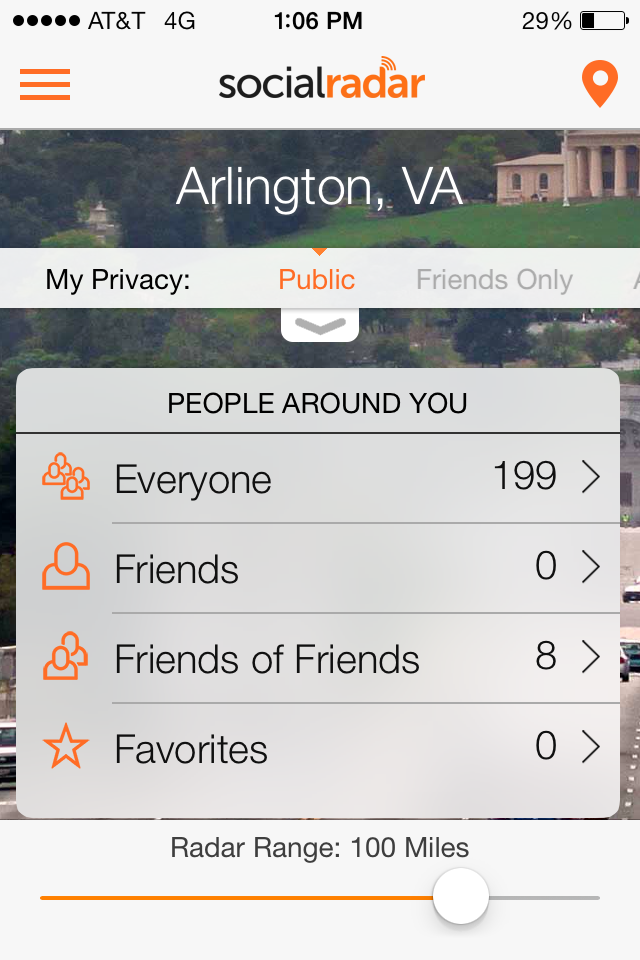 We also asked others if they’d tried out SocialRadar. One of the more techsavvy women we asked, who asked to be anonymous, said in the first week she received 18 requests from random men and 8 actual messages. It sounded a bit like an OKCupid enslaught. “It was a little creepy, but my main suggestion is that SocialRadar should learn where “home” is for you, and turn your location off automatically when there, so it’s not as obvious where you live,” she said.

The app does have two features that set it apart from the other “ambient location” options out there: privacy settings and the Battery Manager. While I still find the idea of an app that constantly tracks your location to be disconcerting, I like that I have the option to keep my profile to my friends only. You can choose from four settings: Public, Friends Only, Anonymous, and Invisible.

The Battery Manager solves that pesky problem other apps like Highlight and Sonar had: battery drainage. You can choose just how much you want the SocialRadar to use your battery, going from High (constantly on) to Off (your location isn’t updated if the app isn’t open).

SocialRadar isn’t a bad app. Clearly a lot of time and money went into its design and usability. But as I was using it off and on the last week, I had one lingering question: Why would anyone continue to use it?

Sure, it’s nice to see people that I’m friends with from various social network accounts in one place, but do I really need to know that someone I connected with on LinkedIn is 500 feet away from me? I get the idea that the app will alert you if a friend is nearby when lonesome or someone you know is at the same event you are. But this would require me to keep the app running at all times in addition to giving everyone access to my location. If I wanted to see those people, I think I’d rather send a text or Snapchat than a SocialRadar alert on my phone.

Each time I used the app, I felt like a bit of stalker–checking in with these people who work a mile or two away from me, ready to pounce on them at lunch or wave creepily at them on the street. While other people kept all of their information public, I couldn’t help but quickly switch mine to anonymous, making the “point” of the app useless in the process.

So just what is the point of SocialRadar? Is it for lobbyists, advertisers, and the desperately unemployed to hunt down their prey? Or is it to help make new friends? Reconnect with old ones? Find possible hook ups? If so, there are many other, better apps for that.