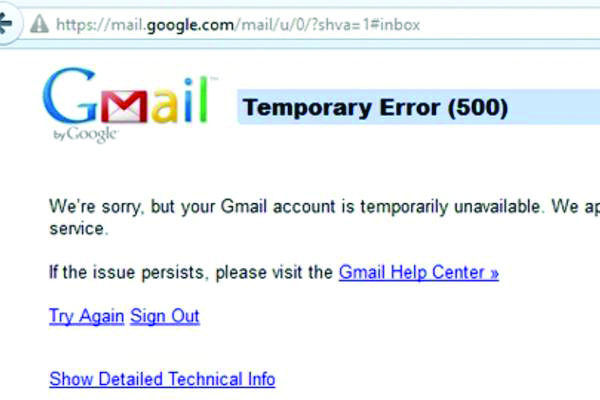 Gmail unexpectedly crashed Friday afternoon, affecting around 42 million users worldwide. Google issued a statement on its official blog saying that most Google users who tried to use Gmail, Google+, Calendar and Documents were unable to access the services for 25 minutes. According to the statement, users were affected from around 2:02 p.m. to 2:30 p.m EST. According to TechCrunch, the outage lasted for around 50 minutes, and the outage was reported in India, the U.S., Canada and Europe.

Google said the issue was a software bug in the configuration generator, and that the issue was resolved. The company apologized for the glitch in service. According to The Verge, YouTube, Google Drive and Google Play also appeared to be experiencing difficulty loading as well. It reported that an hour after the outage, all service seemed to have returned to normal. Attempts to access Gmail using external clients like POP or IMAP protocols were denied as well.

Twitter exploded as panicked Google users across the globe vented about the inconvenience. In the chaos, Yahoo! gleefully tweeted, “Gmail is temporarily unavailable.” The company later apologized for the tweet and it has been deleted.

Ironically, the Google Site Reliability Engineering Team was hosting a Reddit AMA from 3 p.m. to 4 p.m. EST, around the time of the outage.

Unfortunately for hecklers, the engineers downplayed the coincidence during the AMA.”Sooo….what’s it like there when a Google service goes down? How much freaking out is done?” one Reddit user asked. “Very little freaking out actually,”  said Dave O’Connor, Google site reliability manager.