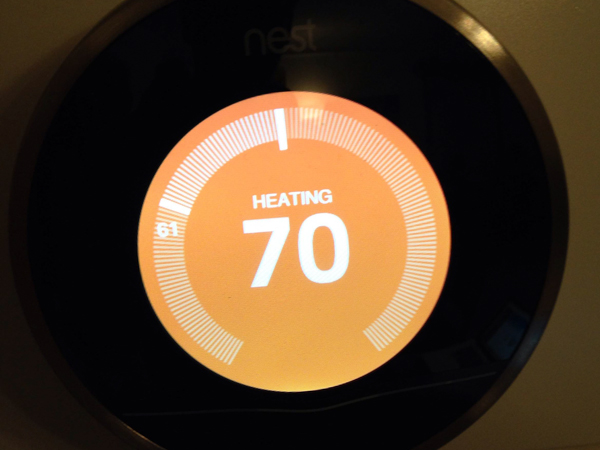 Just prior to posting, Nest was purchased by Google for $3.2 Billion. We can only suggest that Google, the data king, will breath new life into this smart thermostat and the smart home to come. We look forward to posting further updates on this story.

Why I Bought a New Thermostat

Should I buy a Nest? Is it really worth its $250 price tag? All great questions for a device that technically does nothing but monitor your home’s HVAC system. What value could a device reminiscent of an iPod be to your home’s energy costs? After my first month of use, I’m ready to share my thoughts, and detail some of my experiences after owning a Nest Learning Thermostat in this full review.

I’m going to come clean on a couple of things up front. I bought the Nest because previously all I had was a static (non-programmable) thermostat. I didn’t do much research before investing in a Nest. I needed something to combat the electric and gas bills and the Nest looked like a decent choice.  And it was pretty. Sure, I did some blog research like you are now, but mostly it just seemed like an exciting impulse buy.

Installation in 30 Minutes or Less… Probably

If you’re capable of using a screw driver and reading instructions, you’re capable of installing a Nest. Physical installation of my Nest took just about 30 minutes, which is what their website claims is standard for three-fourths of their self-install customers.

Unfortunately, while I tried to complete the installation as quickly as possible to heat my frozen Minnesota dwelling in the middle of December, the Nest had other plans. After installation is completed and you have connected your Nest to Wi-Fi. Nest began doing updates. I felt like I’d just installed a terrible EA game. Until these updates are completed, the Nest will not function as a thermostat. The updates didn’t take an overly long time, but while the Nest took its time to restart and complete the upgrades, I could have made dinner. I would estimate that after updates and restarts the total installation process takes closer to an hour.

The Nest is beautifully simple and well-designed. From the interface of the device, to the interface on the web or the iPhone/iPad app, it looks nice and functions easily. It’s worth noting that the interface is shared, so whether you access it from the app or a browser on a PC, it will have the same look and feel.

The Nest web and app interface show the location of the thermostat (Living Room), and this is where, I assume, if I had more smart home Nest devices (such as the Nest Protect, or additional thermostats) they would appear side-by-side. Here you can also see the outside temperature and access Home Settings which are used to help Nest learn. Once selected, a number of settings to modify thermostat patterns can be adjusted accordingly to meet your needs.

When your furnace and air conditioner are off, the Nest’s physical dial is black. When the Nest is heating, this circle will appear bright orange and when it’s cooling, it’ll be a nice chilly blue. You’ll find this is depicted just the same on the Nest application. The perk of this is always knowing what your HVAC system is up to, whether at home when walking by your thermostat or on the road with your smartphone.

There are several options for whether you want the Nest to heat, cool, or do both. Obviously, if you’ve read anything about Minnesota lately, you know we’re not in need of air conditioning. Mine’s set to heat only. In addition, a quick fan option, energy history (showing the last 10 days of energy usage), the Nest’s schedule (which can be modified if it hasn’t learned properly) and more settings are also available.

Nest Sense or “the brain” is where you find the settings that are my favorite features of the Nest. Two big selling points are its Auto-Away and Auto-Schedule features. The Nest can be set to Away manually, or automatically via Auto-Away.

Auto-Away puts the Nest to a state which will only heat or cool when the temperature of the house reaches the Away values configured. This means if the temperature drops below 58 degrees, the furnace fires up and if it rises above 84, the air conditioner will kick in. In addition to Away values, the Nest allows for emergency values to be set. These values will turn the system on if, for some reason, Auto-Away fails to do so. Auto-Away will not function for the first week or so while the Nest learns your habits.

Auto-Schedule does as the name implies, and it builds a schedule based on how you adjust the Nest’s temperature dial in person or on the app. Auto-Schedule is always learning, and like Auto-Away, it will have a schedule set for you after the first week of use.

Nest Sense settings generally impact efficiency positively, but some of them when turned on affect it negatively for the sake of comfort. Time-to-Temp will display an estimation of the time required for the house temp to reach the set temp. Early-On will turn on the furnace or air conditioner prior to you getting home. Cool to Dry will run the AC to remove humidity from the house – even during the winter. Sunblock tells the Nest when it’s in direct sunlight to adjust the temperature correctly. Airwave turns off your air conditioner’s compressor, but continues to run the fans to spread around the already cooled air. 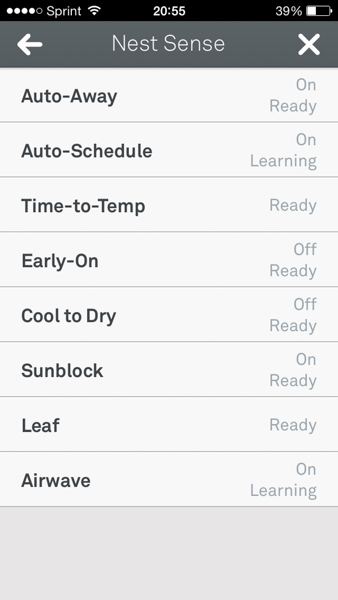 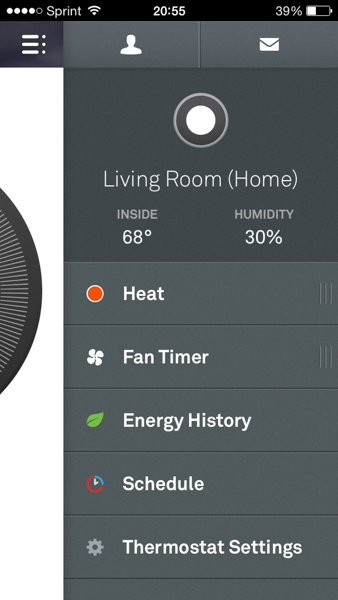 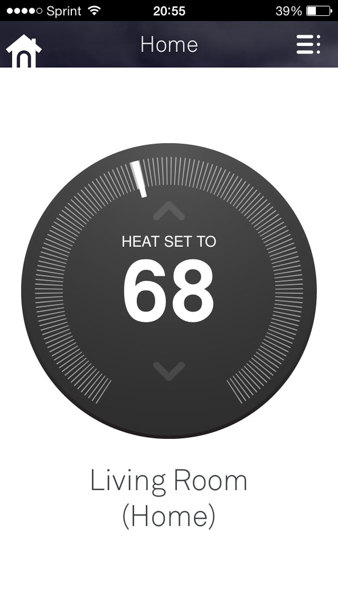 In its simplicity, the Nest Loses a Lot of Points

I’m a guy that loves a good set of data points for comparisons over time. I have recorded my car’s mileage for the past three years for this exact reason. If tracking data points is why you want a smart thermostat, do not buy a Nest unless you want to do a lot of work. The Nest is very closed when it comes to giving out data. I’m not sure if it’s because of a lack of significant data collected by the Nest’s servers (unlikely) or if there’s some other reason for not sharing raw stats. It’s something I’ve found to be a common topic on the Nest community site (a good place to look before investing).

As I mentioned earlier, the Nest app has an Energy History page. This shows only the last 10 days worth of history, which isn’t much to look at. The Energy History page by itself isn’t very impressive. It’s pretty, but contains very little useful data. It shows when the system was active outside of Away zones and how many hours the system was active on any given date. What I mean by Away zones is that once the Nest goes into Away mode it doesn’t consider the energy used to run the heating and cooling systems to meet the Away temperatures as important data.

Nevertheless, the Nest has a system to indicate when you’re doing a good job of controlling the temperature of the house, a “Leaf.” The leaves earned are supposed to indicate that your system is running efficiently. However, I’m still not entirely sure how I earn a Leaf nearly every day. There have only been a couple really frigid days where excessive heating caused me to lose a Leaf. Gold stars for my home, I guess.

At the beginning of every month, Nest sends out an energy report which includes information on how your system ran the last month. Because I haven’t owned the Nest thermostat for more than two months, I have yet to receive a full energy report of my own, but I have seen some online. I definitely wasn’t impressed by the information given in the reports. They include a simple comparison of how many hours of heating/cooling were used over the month vs the previous month, some simple stats about how weather affected your efficiency, and how much more Auto-Away kicked in over the previous month. Last but not least, you get the total of earned Nest leaves (Leafs) during that month (with a comparison to last month) and a ranking against other “Nesters”.

What Nest Doesn’t Seem to Learn

I want more information, and more freedom to do what I want with that information. Sure, give everyone the Leafs (sic) and a pointless pat-on-the-back reports every month, but give those that want it, the detail they sought in the first place. If you’re going to call this a smart thermostat, I hope it’s at least smarter than the customers who bought it instead of pandering to our pathetic love of gold stars.  I want to be able to look back in a few years at the historical weather data (which Nest saves) and the historical energy usage over a larger period of time. If those stats could be combined with estimated fuel and electricity costs for the relevant months on Nest’s reports I’d have much more interest in them.

I admit that most consumers of the Nest aren’t going to be this concerned with the data. And for the novelty of having a smartphone/tablet controlled thermostat with pretty light-up dials and displays, the Nest succeeds.  But for those of us interested in the data, the Nest falls short. While it hasn’t yet met all of my expectations, I’m unlikely to switch to something else in the near future.

Pick one up for yourself on Amazon.