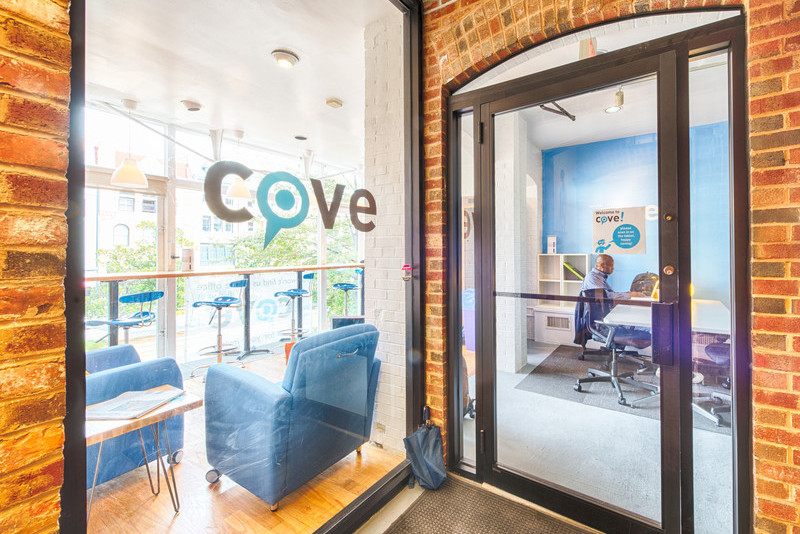 A lawyer, a blogger, and a software developer walk into a bar…

Rather, they walk into Cove, a new take on coworking space that opened in Dupont Circle earlier this fall. Cove aims to offer what co-founder Adam Segal called “an alternative to the coffee shop,” complete with speedy Wi-Fi, color printers, and reserve-able conference rooms. In theory, it’s a place where freelancers, entrepreneurs, or anyone with a side-gig can escape the constraints (or pitfalls) of their traditional (or nontraditional) workspaces, without being subjected to distractions from less-productive peers.

For a monthly fee, Cove offers access to all of its productivity-inducing amenities. The cheapest plan gets you 8 hours of desk time, 1 conference room hour, and unlimited coffee and printer privileges for $24 per month, with membership plans scaling upwards for more regular use. Monthly membership fees can be off-putting, but let’s be honest – you spend at least $24 a month on lattes at your neighborhood coffee shop. That said, time at Cove is money, so spend it wisely (i.e. no Facebook-ing). A mounted tablet stands sentry at the door for Cove members to clock in and out with personal QR codes. Go over your monthly plan and any additional Cove time is billed by the hour.

For entrepreneurial night owls, evening workspace options are few and far between. Coffee shops close early and dinner crowds edge laptop users out of restaurants. Cove is currently open 8AM to 11PM Sunday through Friday, with reduced hours on Saturdays, but its potential expansion into a 24-hour operation could entice more members, especially those with 9-to-5 jobs.

On a recent evening at Cove, an intimate showing of 3 to 4 patrons sat with laptops propped at desks and chairs. A techy-looking couple shared notes on the aesthetics of a website in development: “This piece adds to the cuteness, but makes it a little busy.” For another prospective Cove member, a woman who left a digital advertising firm to launch her own marketing shingle, access to a conference room piqued her interest in Cove, as did the prospect of connecting with fellow self-starters. For many work-from-homers, it seems the appeal is in the printer. (Who has their own nowadays?) The Wi-Fi was fast (as promised) and the coffee was Keurig (unfortunately). The open floor plan is arranged on a spectrum from casual to corporate, with barstools and armchairs near the windows, café tables in the middle, and conference rooms in the back. Outlets abound, and during drinking hours you can hear muted top 40’s hits wafting up from Maddy’s Bar downstairs. Consider it a test of your productive will.

Like parking in the future, Cove’s website and mobile app let members check desk availability and reserve a workspace in advance. In the spirit of building a Cove community, users can even see which of their fellow Cove members are currently working in the space, a feature that could be put to use for good or for evil. (We’ve all had moments at our favorite coffee shops when we wished we could’ve known that guy would be there.)

So if you’re considering Cove, yes, imagine a coffee shop. Then remove all babies, dogs, book club conversation, and good coffee. Add electrical outlets, a color printer, and a Keurig. If that sounds like your path to Productive Enlightenment, then head over to Cove and use your free trial. Idle conversation dwindles when paid hours are on the clock, after all, and every freelancer has fallen prey to the work-from-home blues. Committing to a monthly plan at Cove could become more enticing as they develop more membership perks, build more partnerships with the entrepreneurial community, and open more locations (keep an eye out in Logan Circle and Columbia Heights). But in the meantime, with so much free Wi-Fi in the District, the rest of us may continue fighting over outlets at Chinatown Coffee.