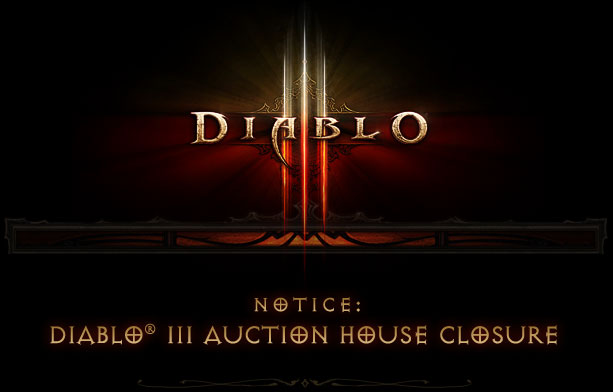 Looks like Uncle Bob will have to get a real job, because he won’t be able to farm those legendaries and flip them on the auction house for cold, hard cash.

Blizzard announced yesterday that the Diablo 3 Auction Houses have been slated for closure. Loved by some and loathed by others, both the Diablo 3 gold and real-money auction houses will be removed from the game on March 19th, 2014. While Blizzard argue the auction house provides a safe and secure place for players to trade items, they also feel it undermines the central pillar of D3 gameplay: kill stuff to find items to make your character more powerful.

A common complaint from the playerbase is how the auction house is by far the most efficient method to gear up a character. The problem is, it’s a flawed reward system. Players receive no surge of excitement or sense of accomplishment when buying an item vs. seeing it drop off of a powerful enemy they’ve just defeated.  But why spend a copious amount of hours praying for an upgrade to drop when you could simply spend five minutes and five million gold (or five dollars) at the auction house?  People may be inclined to take the path of least resistance, but that doesn’t necessarily translate into FUN. Game Director Josh Mosquiera agrees—perhaps 8 months too late for some players.

In a short video attached to the press release, Mosquiera hints that something they’re calling “Loot 2.0” will fill the void left behind by the soon-to-be-axed auction houses.  The release states Reaper of Souls (the upcoming D3 expansion) will introduce a loot system that may have players seeing less items drop overall, but the items will be of of better quality and value. Essentially, Blizzard want to ensure that playing the game—killing monsters—provides the player with a rewarding experience.

With a removal date in late-March, might we expect a Reaper of Souls release soon after? I’d suggest a friendly wager…sooner rather than later, so I still have a place to spend my winnings. 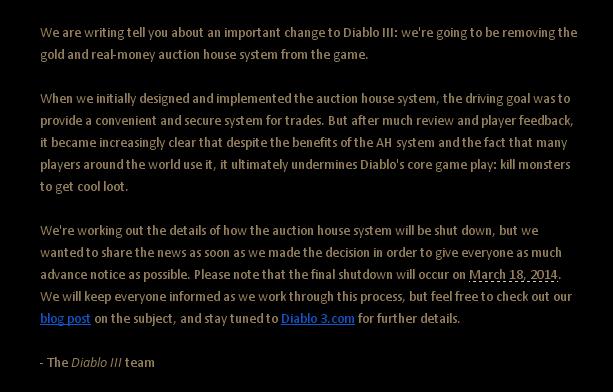