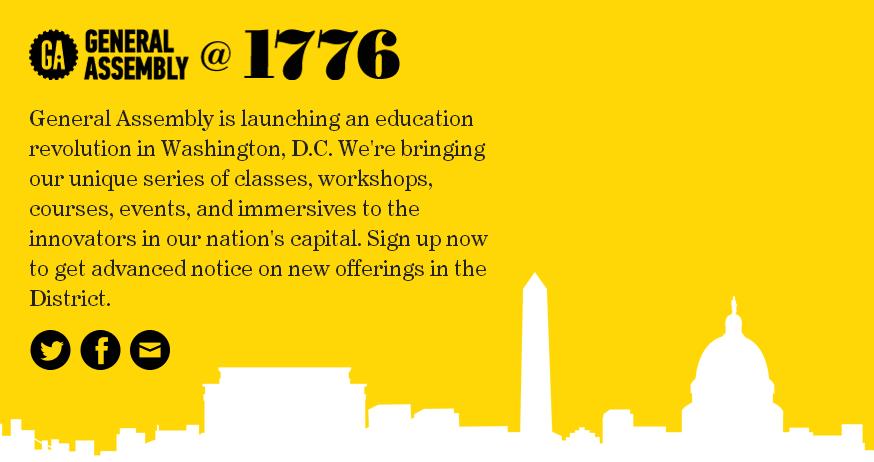 Some breaking news in DC Tech was announced Monday morning by tech incubator 1776 on Twitter. General Assembly and 1776 are teaming up to offer technology startup courses at the offices of 1776 Campus in downtown Washington D.C.

Excited to be partnering with @GA to offer classes and workshops starting this fall right here in #DC http://t.co/bON11yRps9

1776 has been a heavily touted incubator for tech in Washington with plenty of support from Mayor Gray and the dozens of tech startups  (think Hinge) that have set up shop in their space down at 1133 15th Street, NW.  General Assembly, an educational organization focused on business and technology,  will begin offering courses and workshops in early October at 1776’s campus. These will include varied topics on startups and technology including web development. Most of the courses listed run between $75 and $125, with some local 1776 names behind them including Hinge’s own developer, Clay Wardell.

According to the press release, General Assembly originally considered DC as a campus for operations but  prioritized expansion to some of their nine other campuses, the others in places closeby like NYC and reaching as far as Hong Kong and Sydney.

“At General Assembly, we are bringing together a global community of talented, ambitious individuals, and providing them with the skills that they need to succeed in today’s 21st century economy,” said General Assembly Co-Founder and CEO Jake Schwartz. “There is no shortage of ambitious talent in Washington, and we are thrilled to partner with 1776 to add D.C. as the ninth General Assembly campus in our global network.”

While the nod of approval took seven months to get General Assembly on board, it’s clear the partnership  with 1776 and the strategy behind it will bring more power to the DC technology sector, as well as a steady stream of income to the growing number of start-ups incubated at 1776, not to mention an audience of  people thirsty for sexy-startup knowledge.

This initiative will also be paired with 1776’s plans to launch an Accelerator program to educate entrepreneurs on “scaling distribution, refining business models, and navigating regulatory threats and opportunities,” through a three month program that also could have a seed fund set up for young tech startups.