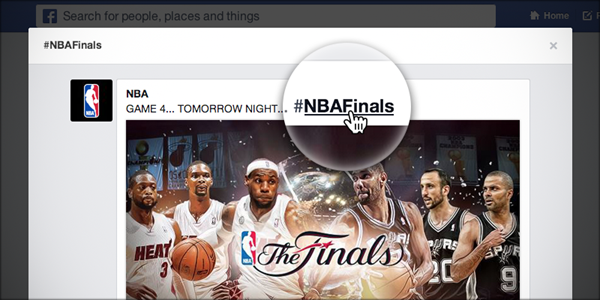 As a way to make amends for all the information they’ve given up to the NSA, Facebook is rolling out hashtags for your posts.

Rim-shots aside, the social network is looking to become more of an “open forum” and now will be adding clickable hashtags, which would link to news feeds and other trending hashtags. Not only that, but tags from sites like Instagram or Tumblr will also be clickable too.

The news is also good for the marketers on Facebook, because they will be able use hashtags in their ad campaigns too.  In the words of the Facebook-studio blog, “join and drive the conversation happening about your business.” Facebook also has plans to expand that functionality on the marketing side to improve insight from their customers.

At this time, the hashtags are only available to a small batch of users, but have future plans of being rolled out to the rest of the website.  Just keep on throwing up your #TGIFF until you can click it. No, that wasn’t a typo.

While the whole idea is interesting, it doesn’t feel like exactly the best move for Facebook. The site had done something like this in the past, grouping popular and trending text, post and news. More importantly, that would trend your friends and the hashtags will lead to profiles outside of your network. In effect, Facebook is moving towards Twitter and trying to get back some of the audience who use Twitter more than Facebook. Still, would anyone really care about the context for #YOLO or #NoFilter when they are checking out a set of pictures from a friend?

Yes, Facebook is about sharing, but it’s also sort of a clique. You’d want to share something with your close friends, but do you really want to share with half the world? If so, you might need to update your security settings. At least if Facebook hasn’t automatically reverted your posts back to  “public” already…