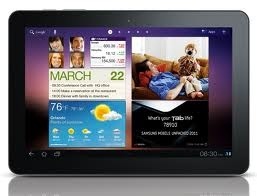 Announced in January, the Samsung Galaxy Note 10.1 will be available online and in stores starting Thursday, March 7 for $599.99. You will notice that this tablet will not be subsidized from Verizon, a growing trend among wireless carriers.

The LTE 10.1″ tablet packs a 1.4GHz Exynos Quad-Core processor and 2 GB of RAM. The rear camera is a 5 MP auto focus camera with LED flash, and users will find a 1.9 MP camera on the front of the device. Photoshop Touch will also be preloaded onto the device for that weird tablet photographer guy inside of you we all know and judge.

Aimed at business users, the Galaxy Tab 10.1 will also come with enterprise apps such as Exchange ActiveSync, on-device encryption and Cisco VPN(Virtual Private Network). The Tab 10.1 also comes with Samsung’s S-Pen for jotting down meeting minutes or doodling over your children’s photos.