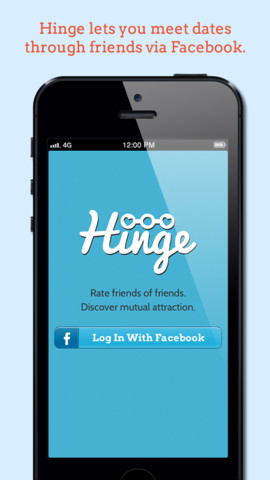 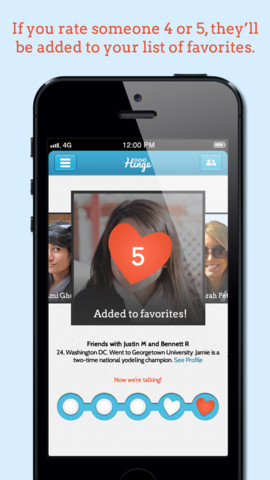 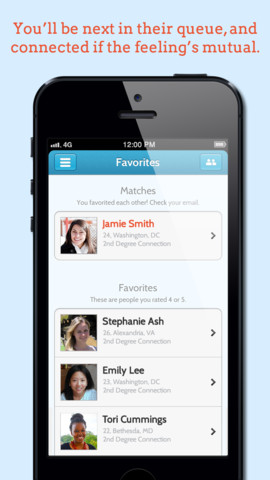 The premise of the app is to link/hook up friends of friends (via Facebook) upon mutual attraction.  Daily matches will be sent to users, and rating potential mates from 1-5 hearts is the game. A mutual rating of 4-5 will get an email sent to each potential match. Social orchestration goes from there either by hitting “reply all” to Hinge’s introduction, or simply by asking your friends about each other (the hinge, if you will). More specifically  the matches are listed at noon daily, and if you’ve rated someone’s profile high enough to become a “favorite,” your own machismo/machisma avatar will be secretly listed in a rating queue for the person of interest to consider.

Tech Void spoke to some attendees of  Hinge’s wild launch party, and some voiced their ethical reservations about the premise of the app, such as “pimping out your friends.” Others suggested it might be a more comfortable dating scenario with less pressure involved.  Richardson has been quoted saying the app is one built with mobile in mind for 20-somethings, while numerous others such as Match.com, Plenty of Fish, and OKCupid are more web-based (at least originally) and aim at a wider range of demographics.

While rating matches is certainly nothing new for online dating, the ability to meet strictly people who are linked to your own network of friends is a unique twist. Time will tell on the success of the application in a sea of new dating platforms, but for those eligible DC bachelors and bachelorettes, this could be a ticket to finding that Valentine with less than a week to go.  Currently there’s no word on whether an Android or alternate smartphone platform for Hinge is being built, but we’ll be circling back to confirm. Download the app on the Apple Store to start creeping on your roommate’s friends now.