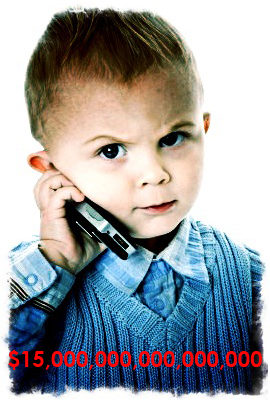 One of the biggest complaints from wireless customers these days is how expensive the service is. After all, the two major wireless providers, Verizon and AT&T, charge $85 and $95 respectively for an unlimited talk/text plan with 1GB of smartphone data. Still, no matter how much you are paying each month for your wireless bill, we can guarantee you have never received a bill in the amount of $15 quadrillion (Holy $#&! is right. That’s 15 zeros. )

The worst part? Ms. San Jose was enrolled in auto-pay, and although she placed numerous calls to the carrier, her bank account was charged for the full amount on her bill. On top of that, every time she pleaded with customer service about the bill, she was charged a service fee of €12.50 ($16.19). Adding insult to injury, Bouygues twice offered San Jose a payment plan for the fee before finally copping to the “printing error”.

In 2005, Bouygues Télécom along with SFR and Orange SA was found by the Conseil de la Concurrence (the French competition body) to have acted against the best interests of consumers and the economy by sharing confidential information between 1997 and 2003. The three companies were collectively fined €535 million in total.