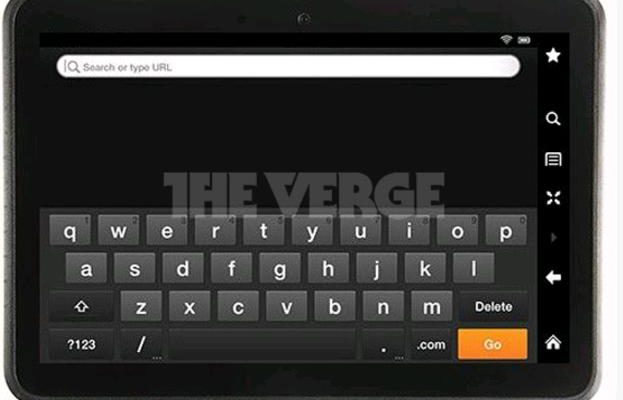 The NEW Kindle Fire was just unveiled to The Verge via a photograph sent to them by an unknown source. Yes, it looks bigger.

With the rumors flying about regarding a next week launch/announcement date, and Kindle Fires being “Sold Out” online, it’s only reasonable to believe this could indeed be the next Kindle  Fire. Or, are there two? Verge and the rest of the lot are anticipating another list of Kindles to debut, including a 7″ Kindle Fire and a 10″ model, much like the traditional tablet size. The one shown in this leaked photograph is presumably iPad-like in girth (at least, we  at Tech Void think its dimensions suggest a wider, taller tablet) and includes a front-facing cam up top. It also shows off the usual digital black and orange chiclet keyboard, search field and function buttons (home, back, full-screen, search, etc.).

The Verge says another unpublished photograph of the second model was sent, but they were told not to release it.  The black, rubbery tablet launched last year and was a breach in the marketplace due to its notably affordable $199 price tag and access to the Android Market, whilst using a custom Amazon skin with their own blazing-fast “Silk” browser. The tablet was so successful, rumors have also been flying around regarding Apple’s release of a 7-9″ tablet ever since.

Keep tuning in as the story develops.