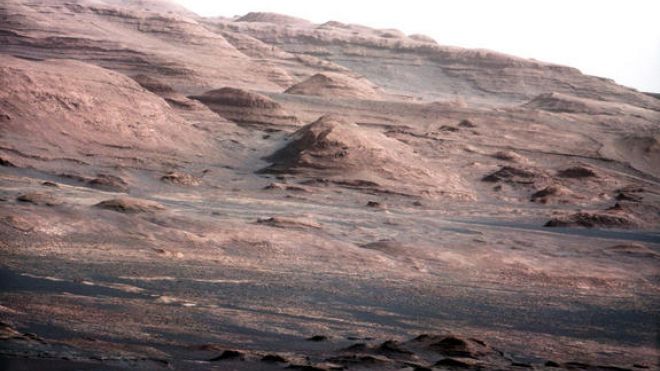 Update: After Mars heard its first oratory speech from Charlie Bolden last week, an even more universal oral art form was broadcasted on Mars, a song. By whom? Will.i.am, of course. “Reach for the Stars”  was played on Mars and beamed back to an audience of students in NASA’s Jet Propulsion Laboratory in Pasadena, CA. Watch/hear it for yourself here.

There’s more firsts from the Red Planet this morning, as Curiosity makes its way towards Mount Sharp. With the first high-resolution, awe-striking panoramic photos of the martian mountain and the giant Gale Crater released, NASA continues to make Martian territory more like home. In fact, beyond this milestone,  Mars heard its first Earthling today (You have no idea how fun it is to use that word legitimately).

Curiosity broadcasted a pre-approved greeting from Charlie Bolden, a NASA adminsistrator. In wake of Neil Armstrong’s passing, it’s certainly a bittersweet afterthought for many, including Dave Lavery, Curiosity program executive, who said, “With this, we have another small step that’s being taken in extending the human presence beyond Earth, and actually bringing that experience of exploring the planets back a little closer to all of us.”

You can check out the full-fledged Mars statement after the break along with a link to the video here.

Hello. This is Charlie Bolden, NASA Administrator, speaking to you via the broadcast capabilities of the Curiosity Rover, which is now on the surface of Mars.

Since the beginning of time, humankind’s curiosity has led us to constantly seek new life…new possibilities just beyond the horizon. I want to congratulate the men and women of our NASA family as well as our commercial and government partners around the world, for taking us a step beyond to Mars.

This is an extraordinary achievement. Landing a rover on Mars is not easy – others have tried – only America has fully succeeded. The investment we are making…the knowledge we hope to gain from our observation and analysis of Gale Crater, will tell us much about the possibility of life on Mars as well as the past and future possibilities for our own planet. Curiosity will bring benefits to Earth and inspire a new generation of scientists and explorers, as it prepares the way for a human mission in the not too distant future.