The past five years, the Guild Wars community has been awaiting Guild Wars 2. ArenaNet set the bar incredibly high, giving one promise after another. As such, here is my personal preview experience of the game’s Betas. Guild Wars 2 can currently be preordered for $59.99. Update: Slickdeals has published a code for a $48 preorder deal via Gamefly.

My name is Paul Davis, and I am a Guild Wars addict. Guild Wars is a free to play MMORPG back when World of Warcraft came out. I was a sophomore in college when it released. My roommate got me into it, plunging me into the world of Tyria, and since then other games have paled in comparison. Sure I don’t go back too often, but in a touch over seven years I logged nearly 2900 hours. That’s a bit over an hour a day for the past seven years.

In Guild Wars, players went into instances, staying away from other players they didn’t want to play with. In Guild Wars 2, ArenaNet promised players would want to play with each other. This is as revolutionary as parents getting told there is a method to make their children share. In other MMOs, players compete for resources, kills, quests, and other items. I remember early on in World of Warcraft, waiting to kill a giant spider that spawned every five minutes or so. Everyone swarmed and slaughtered the spider, which didn’t stand a chance, but only one of those players left, overjoyed to fulfill the spider killing quest. ANet was telling me I would be happy to have those players around? Nonsense!

ANet promised I wouldn’t have to wait until the level cap, or at least the original level cap, to feel epic. Guild Wars had a very low level cap of 20. Most of the game wasn’t working up to a high level, but purchasing the skills and getting the right combination to get through challenges. Major challenges cropped up immediately, instead of continuously dealing with the “Kill 25 x” or “Bring 25 trophies from y” quests until you reached level 60. ANet raised the ceiling to 80, and still promised players would be doing epic things at low levels. How could someone make the early levels of a game fun?


Promises of free to play (which they were already doing), swimming, underwater combat, a highly visual and exciting combat system, five playable races compared to the humancentric Guild Wars, World vs World where players war over grand castles and keeps, and so much more issued forth from the ANet press within the last five years, and at a certain point I had to shut down the glory of these promises. Just like politicians, developers loved to tell players all of these promises, but rarely actually lived up to the promises.

But I have seen the promised lands of Tyria, and I can tell you they are filled with milk and honey, at least early on. During the beta events the past few months, I’ve spent more than a few hours playing.

While there are grind based heart quests, there are also world and region events. Suddenly a peasant runs up to you, “Bandits are attacking the local farms! Please help!” I talk to the peasant and a marker shows up on my map. I go to it. Holy toe jam, there are literally bandits attacking. Peasants are being slaughtered, bails of hay are lit on fire, and players are running all over the place putting out fires, reviving the innocent dead, and cutting down the bandits. As long as you participated in this amazing display of bloodshed, you gained full experience and loot. Sure, I primarily made sure the farm didn’t burn down, but I still get experience for participating in the event. Very Diablo-esque.

The comment about feeling epic before level 60? We saved that farm at level two. Sure it doesn’t seem like much, but by level 15 we were closing portals to the underworld and thwarting a great monster from the abyssal pits of hell. Each race has a world event at level 15 in one of their areas of the world, though you can experience all of them with one character. By level 80 there is a full siege on an undead city in order to kill their master: a great dragon from time forgotten. 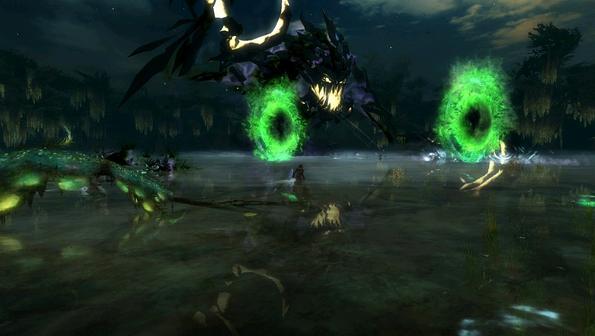 These are also quest lines, not simply single point quests. With the underworld, we first spoke with a scholar who wanted to research some strange energies. Because players said they were interested in helping, he went off to do the research. The research led to portals opening, spewing forth underworld creatures. If we don’t close those portals, those creatures continue to spawn, consuming the countryside. If we do, we fight the great behemoth. Everything players succeed or fail at has a consequence, making players feel like they’ve contributed to the world and how it formed.

In a large scale battle called World vs World, large castles and keeps really do exist for players to kill each each other over. The game mode makes the effective level of everyone playing 80 to keep battle fairly even, though players can gain experience to actually reach 80. In the World vs World, players also gain loot off their dead opponents, allowing PvP heavy players to remain in this mode and still reach the level and equipment other players would in the non-competitive game.

In the end, these are just a few of the amazing things about Guild Wars 2. It was one of the few times a game company promised the moon, and instead of delivering a false lunar landing, they showed me the stars.