The mobile charger uses sodium silicide cartridges from SiGNa Chemistry that react with Hydrogen from your Nalgene bottle’s good friend H2O to produce electricity. Pour some in the Powertrekk’s water reservoir, and you’ve got hours of battery life where you likely don’t have a 3G signal anyway. This is due to the 1500 mAh internal rechargeable battery inside the device. Adapters for iPhones and micro-USB smartphones will work with the lime-green device, and it should charge an iPhone about 1.5 times over.

The only issue is its marketing tactic. It’s not exactly a renewable fuel in that it requires a new sodium silicide cartridge per use, and they cost $12 a piece. The charger is already a $229 investment, so it’s a bit of a never-ending scheme for power (Pinky and the Brain, anyone? Narf.).  Still, it’s better for the environment than buying several backup batteries. Plus, it comes in neon green, orange, and several other punchy colors. The device was said to be in stores by May, but it’s still not shown on REI’s website, and Powertrekk’s press has been quiet ever since.  Nevertheless, we suggest you power-hungry mountain climbers keep your eyes peeled. 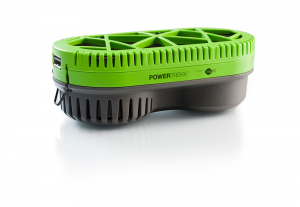 Check out the product video below: